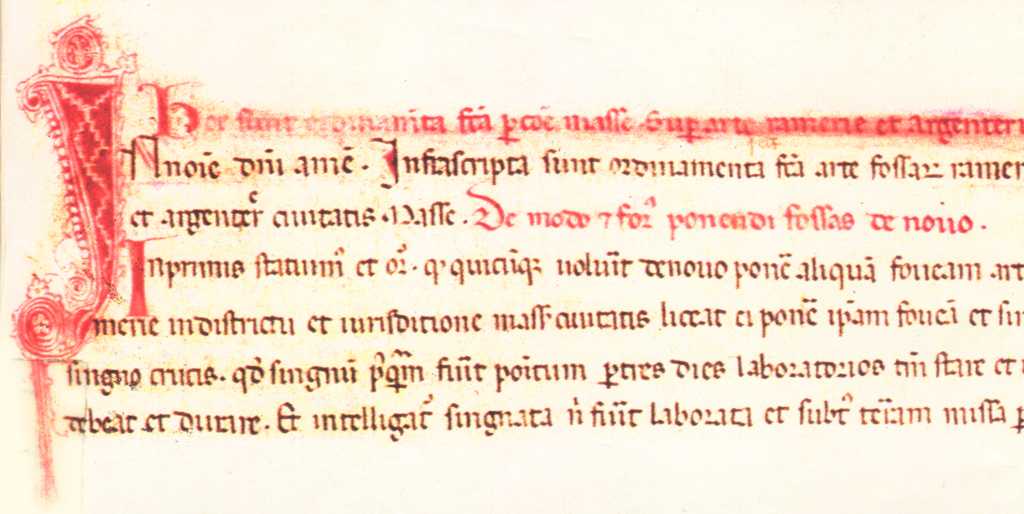 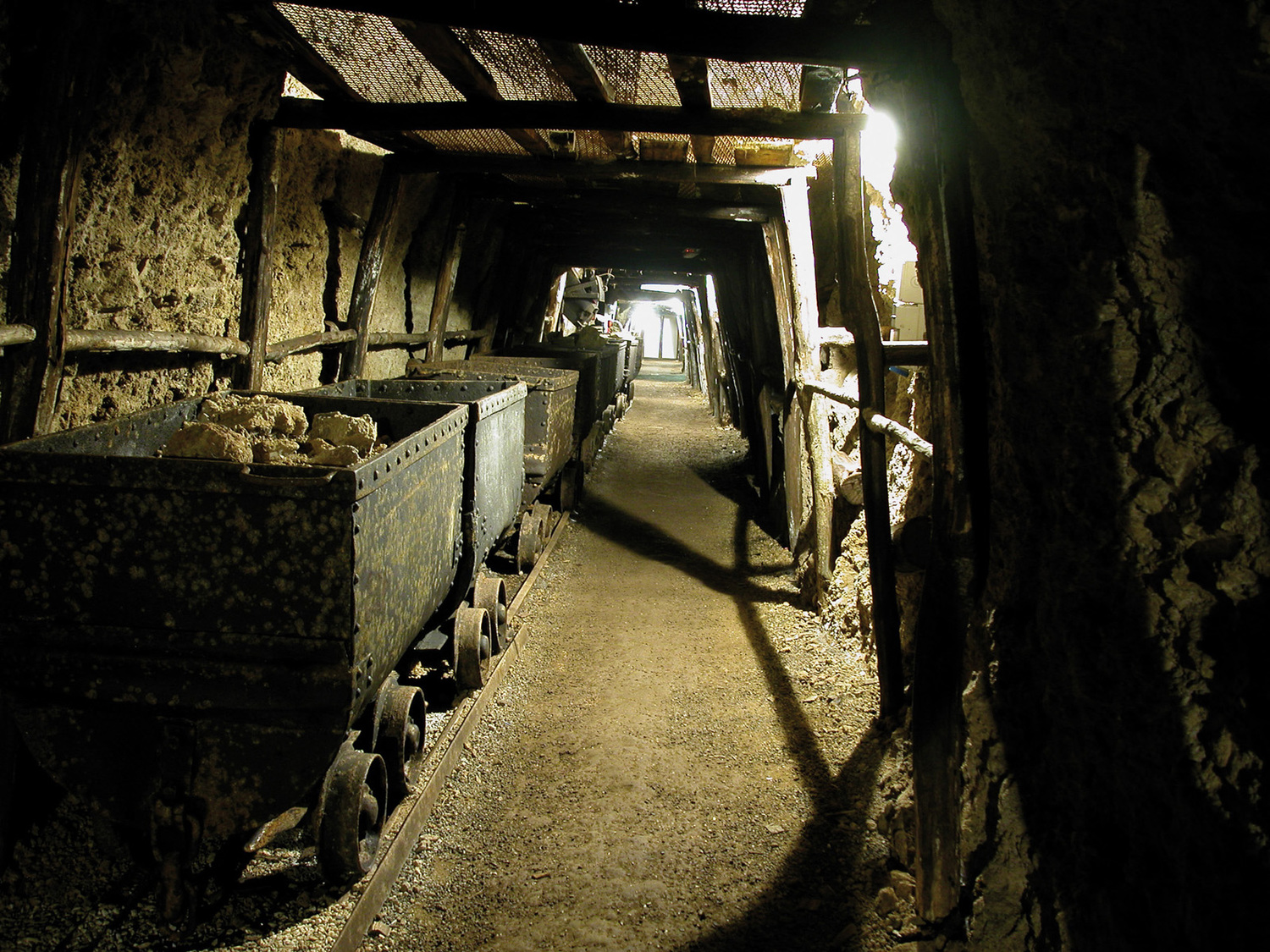 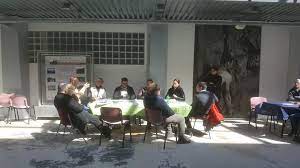 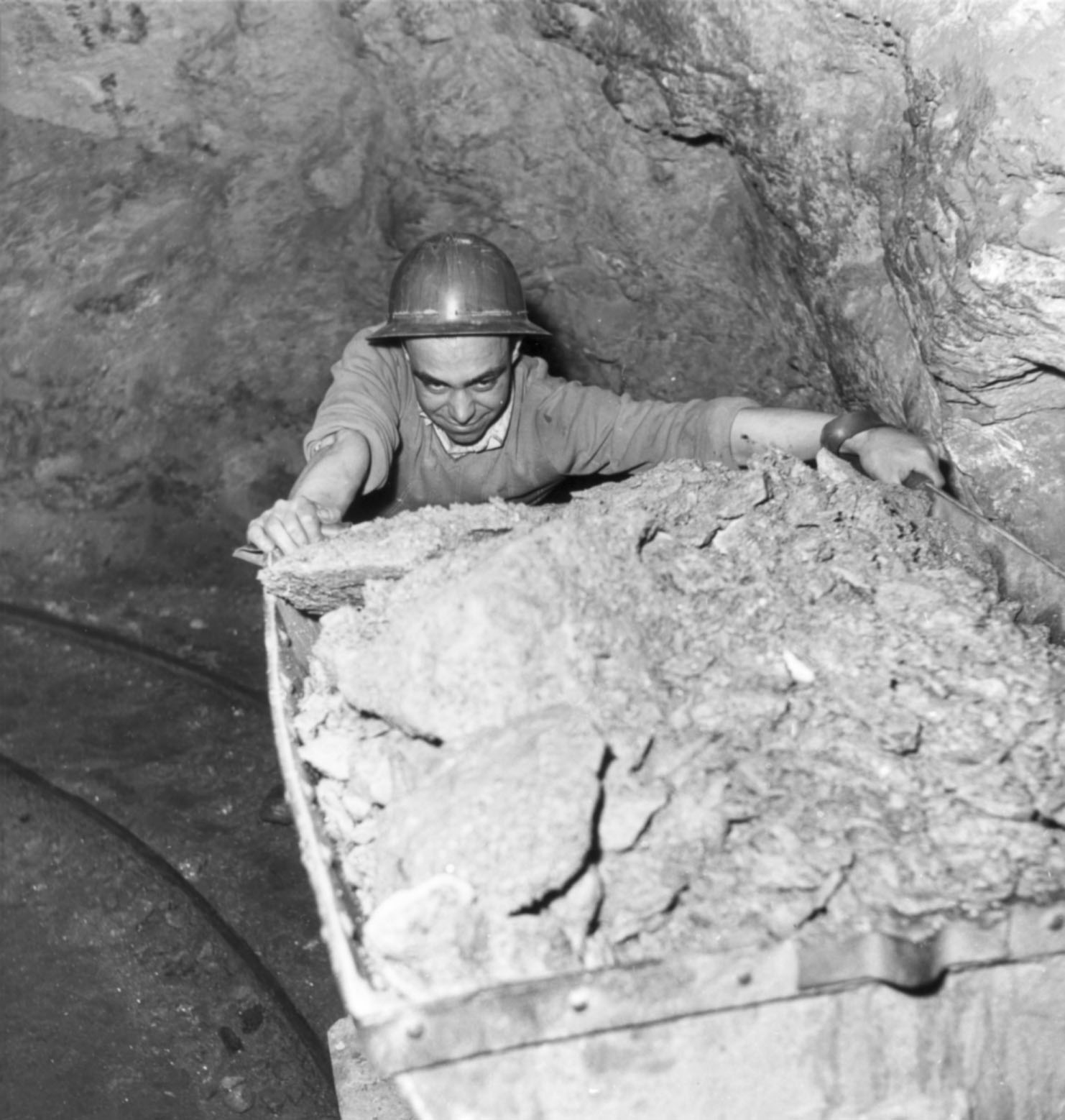 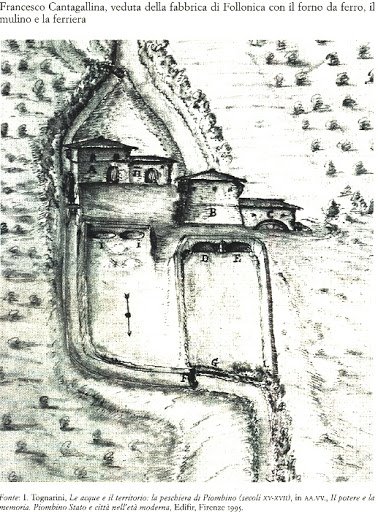 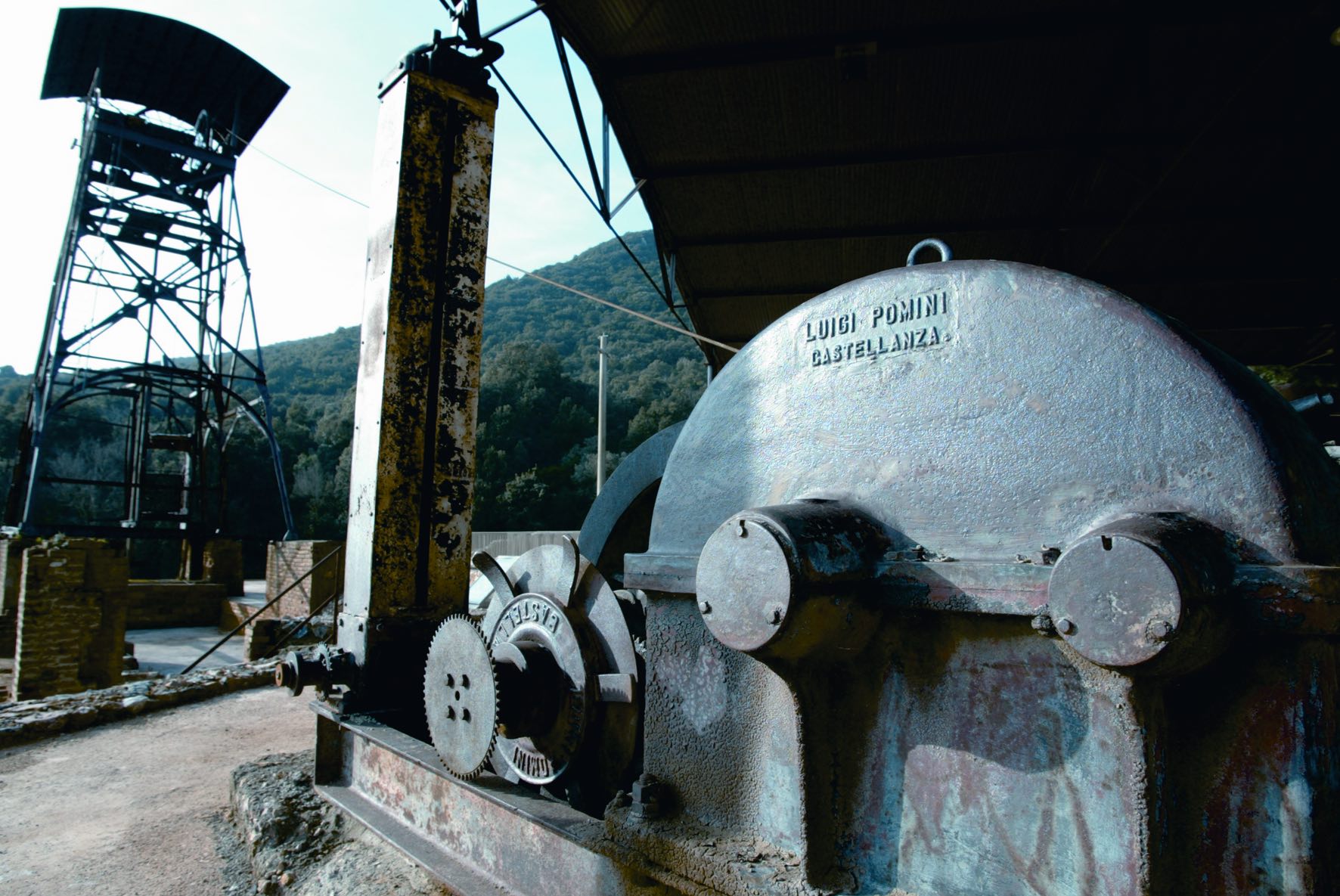 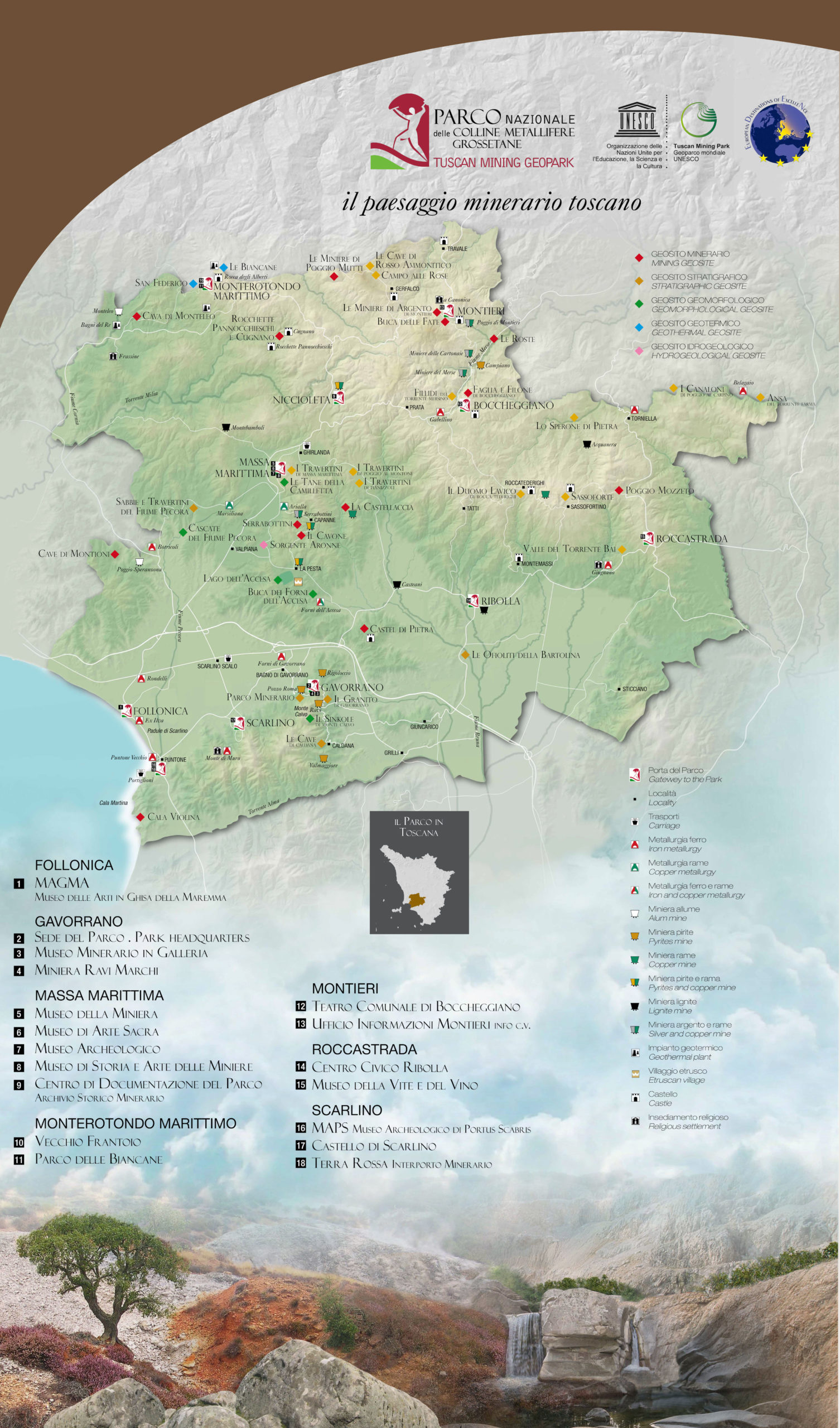 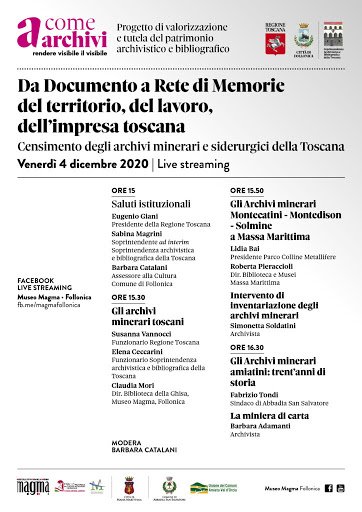 One of the elements of the Park’s mission is to recover and preserve in museums and archives the industrial archaeological, documentary, book and photographic heritage of cognitive interest regarding the mining history and culture. The project for the Mining Archive of the Metalliferous Hills at the Documentation Centre of Niccioleta (Massa Marittima) started in 2005, is in continuous implementation and improvement and is financed with the Creo ERDF OP 2007-2013 funds – Line of interventions 5.4b. In the more complex framework of the redevelopment of the former mining complex of Niccioleta (a detailed description of the project is provided here), part of the building of the old mine infirmary has been transformed into the headquarters of the Archives and has become the technological and scientific hub of the Park.

The material consists of a vast documentary archive that was first surveyed by the Archival Superintendency in 1981. These are company papers of several companies operating in the mining and chemical field, including some of the largest Italian industrial groups such as Montecatini – Montedison, Incorporated Companies, Solmine (Società Lavorazione Minerali) created in 1972 by Montedison and passed in 1973 to EGAM Ente Gestione Aziende Minerarie, a state-owned entity, and then to ENI in 1978. The industries belonging to these industrial groups are: the mines of the Colline Metallifere mining basin and therefore the pyrite mines of Gavorrano, Boccheggiano, Niccioleta, the mixed sulphide mine of Fenice Capanne and the lignite mine of Ribolla. 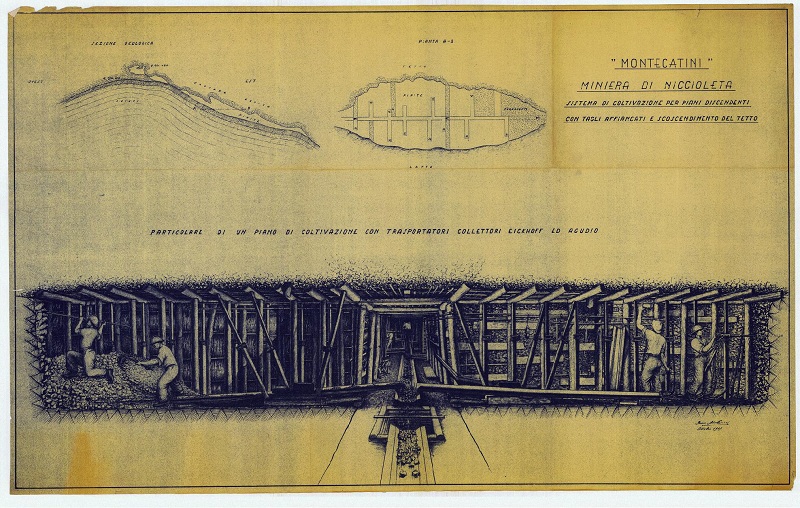 The mines of the SMI Società Mercurifera Italiana (Società Mercurifera Italiana) were merged with Montedison on 1 November 1972 and passed to Solmine Gruppo Egam on 1 May 1973 following the reorganisation of the Montedison Group. They include the mines of Bagnore in Santa Fiora and the surrounding area and Monte Labbro in Roccalbegna and the surrounding area, plus the Catabbio – Fontanelle mine in the Semproniano and Manciano area, which had belonged to the Società Mineraria Rimbotti and then was passed to SMI in 1967. The Del Franco mine on the island of Giglio, which has belonged to Montecatini since the 1950s, and the Monte Argentario Ferromin mines should also be added, as well as the Manziana Furbara mine in Latium, and other mines in Abruzzo, Apulia and Sardinia.

The documentation also includes material relating to the industrial sector of the Scarlino plant built between 1960 and 1965 to use the ore from the Maremma units for the production of sulphuric acid. An integrated production system capable of mainly producing sulphuric acid, but also recovery steam and electricity in the chemical line and production of iron pellets in the metallurgical line for the steel industry.

The map section includes a complex technical documentation with hundreds (about 6674) of plans, plans, research projects, tunnels, wells, elevations, sections, etc., of which 5314 were selected and collected in 184 boxes as part of a digitisation project involving 1209 maps, carried out by the Institute of Geotechnologies of the University of Siena directed by Prof. Carmignani and available online at www.neogeo.unisi.it/dbgmnew . The project has been completed with the cataloguing and identification of the contents of the 184 boxes on digital support by Dr Simonetta Soldatini on behalf of the Tesauro Cooperative in collaboration with the Tuscan Archival Superintendency. 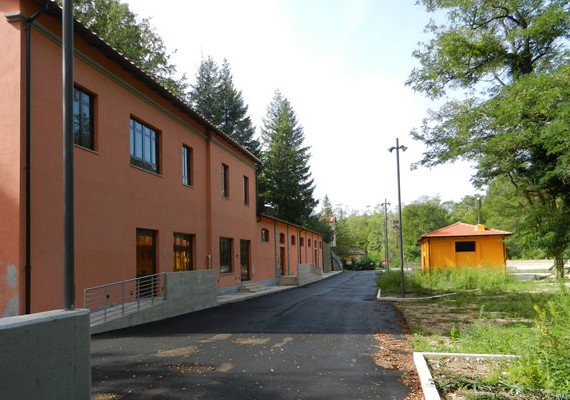 The Mining Archive: a complex of the former Niccioleta Mine, located in the Niccioleta locality in the Municipality of Massa Marittima.

Openings must be booked in advance by contacting the Parco Nazionale delle Colline Metallifere (0566844247) or the Massa Marittima Town Council (0566 906290): Personalised visiting times or opening periods for projects and research can be arranged.

A come Archivi (A for Archives): “From document to network of memories of the Tuscan territory, work and enterprises. Census of mining and steel archives in Tuscany”

The project A come Archivi, whose coordinator and leader is the MAGMA Museum in Follonica, aims at enhancing the sources related to the history of work, production and social history of the territory and the communities involved. The reconnaissance of the archives of the working realities of the territory is important for the preservation and safeguard of the documentary heritage, but also for the enhancement of the historical and social memory of the communities they belong to. The establishment of a network that brings together the mines of Amiata, the Colline Metallifere, the iron and steel industry of Follonica and Piombino, and the mines of Elba, constitutes a narrative, historical and documentary potential that is unique on the national scene. By collecting, studying and valorising what is contained in the archives of the bodies involved, a significant part of the history of work in Italy can be written.